Home Inspector Kevin Michaels, of Hudson Valley Property Inspections, is certified in solar energy installation and design and can assist the new home buyer by answering any questions that they may have about solar energy. Solar energy offers considerable advantages over conventional energy systems by nullifying flaws in those systems long considered to be unchangeable. Solar power for home energy production has its flaws, too, but they’re dwarfed by the advantages listed below.

The following are advantages of solar energy: 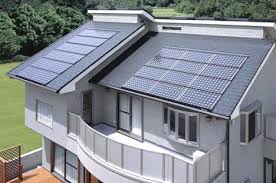 Raw materials are renewable and unlimited. The amount of available solar energy is staggering — roughly 10,000 times that currently required by humans — and it’s constantly replaced. A mere 0.02% of incoming sunlight, if captured correctly, would be sufficient to replace every other fuel source currently used.

Granted, the Earth does need much of this solar energy to drive its weather, so let’s look only at the unused portion of sunlight that is reflected back into space, known as the albedo. Earth’s average albedo is around 30%, meaning that roughly 52 petawatts of energy is reflected by the Earth and lost into space every year. Compare this number with global energy-consumption statistics.  Annually, the energy lost to space is the combined equivalent of 400 hurricanes, 1 million Hoover Dams, Great Britain’s energy requirement for 250,000 years, worldwide oil, gas and coal production for 387 years, 75 million cars, and 50 million 747s running perpetually for one year (not to mention 1 million fictional DeLorean time machines!).

Solar power is low-emission. Solar panels produce no pollution, although they impose environmental costs through manufacture and construction. These environmental tolls are negligible, however, when compared with the damage inflicted by conventional energy sources:  the burning of fossil fuels releases roughly 21.3 billion metric tons of carbon dioxide into the atmosphere annually.

Solar power is suitable for remote areas that are not connected to energy grids. It may come as a surprise to city-dwellers but, according to Home Power Magazine, as of 2006, 180,000 houses in the United States were off-grid, and that figure is likely considerably higher today. California, Colorado, Maine, Oregon, Vermont and Washington have long been refuges for such energy rebels, though people live off the grid in every state. While many of these people shun the grid on principle, owing to politics and environmental concerns, few of the world’s 1.8 billion off-the-gridders have any choice in the matter. Solar energy can drastically improve the quality of life for millions of people who live in the dark, especially in places such as Sub-Saharan Africa, where as many as 90% of the rural population lacks access to electricity. People in these areas must rely on fuel-based lighting, which inflicts significant social and environmental costs.

Solar power provides green jobs. (When done correctly).  Production of solar panels for domestic use is becoming a growing source of employment in research, manufacture, sales and installation.

In the long run, solar power is economical. Solar panels and installation involve high initial expenses, but this cost is soon offset by savings on energy bills.  Eventually, they may even produce a profit on their use.

Solar power takes advantage of net metering, which is the practice of crediting homeowners for electricity they produce and return to the power grid. As part of the Energy Policy Act of 2005, public electric utilities are required to make available, upon request, net metering to their customers. This practice offers an advantage for homeowners who use solar panels (or wind turbines or fuel cells) that may, at times, produce more energy than their homes require. If net metering is not an option, excess energy may be stored in batteries.

Solar power can mean government tax credits. U.S. federal subsidies credit up to 30% of system costs, and each state offers its own incentives. California, blessed with abundant sunshine and plagued by high electric rates and an over-taxed grid, was the first state to offer generous renewable-energy incentives for homes and businesses.

Solar power is reliable. Many homeowners favor solar energy because it is virtually immune to potential failings of utility companies, mainly in the form of political or economic turmoil, terrorism, natural disasters, or brownouts due to overuse. The Northeast Blackout of 2003 unplugged 55 million people across two countries, while rolling blackouts are a part of regular life in some South Asian countries, and occasionally in California and Texas.

Solar power conserves foreign energy expenditures. In many countries, a large percentage of earnings is used to pay for imported oil for power generation. The United States alone spends $13 million per hour on oil, much of which comes from Persian Gulf nations. As oil supplies dwindle and prices rise in this politically unstable region, these problems continue to catalyze the expansion of solar power and other alternative-energy systems.

In summary, as technology advances, solar energy will continue to offers advantages to conventional fossil fuels and other renewable energy systems.